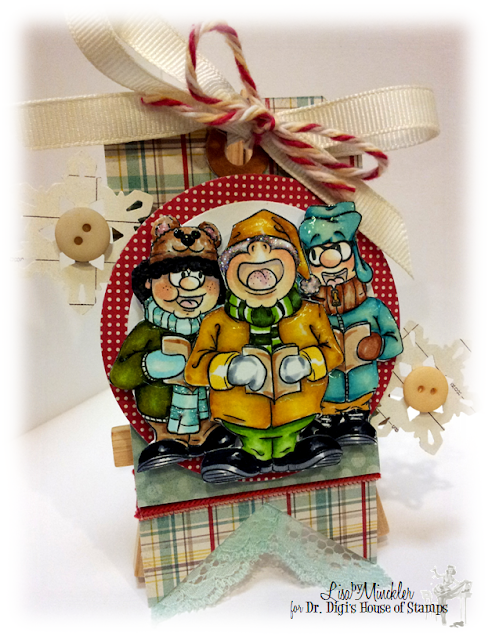 'Twas late the night o' Christmas Eve whilst other boys were goofing, but not the three you see before, for they had destiny.  Bundled in their downy coats the trio set out to singing.
Some would laud, some would clap, some would ask for autographs, so nary once did they give up, to be the best around.  Lads they were, barely a hair grew from their cheeks, but wow the crowds, they did indeed with their tenor, baritone and occasional squeak of puberty.
Far and wide in their little town, they were crowned a sort of celebrity.  They'd pack the streets, the tents, the pubs, even once ol' Ms. Murphy's bakery.
Legends they are and always will be...from those they left behind. So if you're ever in Carlingford, sit a spell and take a pint and smile as you hear the tale of  three best friends that sang with their hearts, affectionately known as We Three Kings.

Each time I see one of Dr. Digi's House of Stamps images, I can't immediately put them on anything. I have to color them up and study them for days. There is such a story to each of these characters and when I saw this stamp, I knew there needed to be more to the story.
The 3 young men grew up and went off to college to pursue their singing careers. They met a few other men along the way and well.....maybe you've heard of them?
To find out who they grew up to become you can visit my blog here.

Thank you so much for the visit and I hope you've enjoyed this little story...
Hugs n' Happy Stamping,
Lisa xx
Posted by Lisa Minckler at 11:00